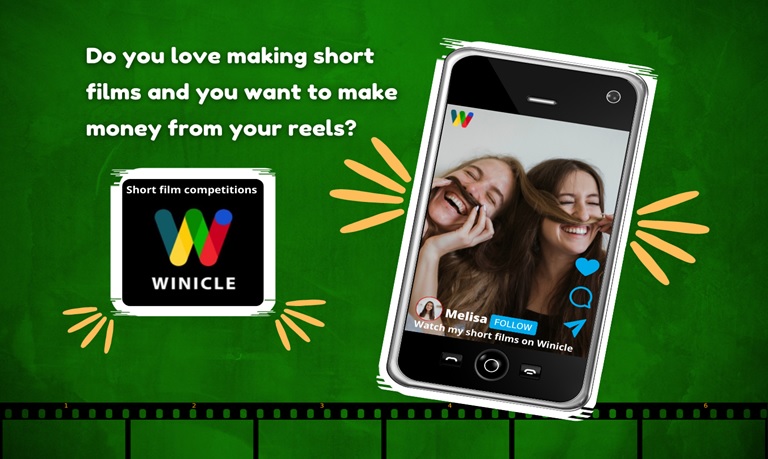 How to make money with short films?

Short films or videos are definitely a way of entertainment and in many cases, a way to become famous on social media. Now these are also a way of marketing a product or brand as well. Making a film certainly means some investment and the expectation of profit and recognition. When it comes to investing in short films, it comes in two ways; monetary investment and time investment. A filmmaker can definitely make money from the film as well. In this article we discuss how to make money from your short films on Winicle short video platform so you can successfully start your filmmaking and influencer career.

It is true that when a filmmaker decides to produce a film, it is necessary to raise funds. From crowdfunding to loan, there are different ways of getting the required money to make your video. More importantly you will need to spend time creating the short films on a regular basis. So you will need to have endurance and patience. Many to-be-influencers give up during the process as it takes a long time for them to get to a profitable and money making stage in the world of social media. The good news is that with Winicle film challenges, you make money from the beginning of your short film career journey. You can upload your short films to short film competitions for free and when you get the most likes on your videos you will be rewarded with cash and monetary prizes for your films. Winicle enables short film makers to start their career. So unlike other short film festivals that you will have to pay to participate or you only can make money after a long process of building your followers on social networks, on Winicle you can start making money from the start.

Are you a nano influencer or a short film maker? Are you struggling to make money from your short videos because you don’t have enough followers? Are you considering an influencer job but don’t know where to start? You want to make lots of followers? If your answer is yes, you should try Winicle and participate in film festivals to make money if you are considering starting your influencer career or film making career in general.

There are already a lot of micro influencers and short film makers who are making money with reels on Winicle. On Winicle you can start with no followers, enter film contents for free by posting your short videos. Your short videos get high exposure and you guess it right, if your film gets alot of likes you automatically win cash prizes for your films. This way you can build your followers while making money for your 15 second videos and reels.

How to Address Burnout in a Hybrid Work Environment

How To Win Deals With Effective Consultative Selling

How to Build Your Personal Brand Online

The most effective method to Start A Social Media Career